The newspaper article featuring me

As promised I share with you all the paper article about me published a couple of weeks back. If anyone is interested in a PDF of it, drop me an e-mail and I will forward it on.
Thank you to the ever so lovely Paula from Market Match for the scan . 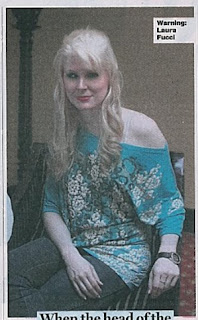 I survived skin cancer -- so I warn my friends about using sunbeds
Laura Fucci tells Lisa Jewell her courageous tale, and stresses the need for skin safety

Laura Fucci was just 17 when she decided to get the mole on her back checked out by a doctor. It was to prove the wisest and most important decision of her young life.
Sitting in the oncologist's office, Italian-born Laura was given the worst news imaginable: she had a severe form of skin cancer, and the disease was already in its third, potentially fatal stage.
The teenager sat there dumbfounded. All her other cares went out the window -- she was now in a battle to save her life ...

Laura had sought medical help because she was prone to getting moles as a result of her having a form of albinism that means she has no pigmentation in her skin and hair and is susceptible to sun damage.
"I was sent to a consultant who checked all my moles and said she didn't like the look of one on my right inner thigh," recalls Laura.
"They removed the mole and I didn't think much more of it. Then about a week later I got a call.
"When the head of the oncology unit takes time out from his busy day to call you, you know it's something serious. I didn't sleep much that night. I had a feeling it wasn't going to be good news."
The next day, Laura was given her diagnosis and, she says, she "lost it".
"I panicked because I knew the third stage meant chemotherapy and radiotherapy," she says. "I knew I could get through them, but it was the thought of losing my hair that really got to me."
Laura underwent surgery to check how far the cancer had spread.
"I was so lucky -- it was a few millimetres away from the artery. I didn't have to go through chemotherapy or radiotherapy.
"The doctors told me that if I'd left the mole, it would have reached an artery within three or four months and would have spread."
Laura, who's now 28, gets regular mole checks as she has an increased risk of developing skin cancer again. She's eager to spread the word about sun safety and is especially vocal with friends who use sunbeds.
"I tell them that it's not worth it -- I've gone through skin cancer and I wouldn't wish it on anyone," she says.
Laura moved to Ireland two years ago. While most of us lament the lack of good weather here, for her it has its benefits.
"Where I'm from in Italy it's sunny a lot of the year, so I have to wear gallons of sun cream," she says.
"In Ireland I don't have to wear sun cream every day, but I always have a facial moisturiser with SPF and wear sun cream in the spring and summer."
When Laura was growing up, there wasn't much awareness of albinism, and she had bad cases of sunburn.
"My family was at the seaside almost every weekend," she says. "I also attended a crèche, and as much as they'd tell an eight-year-old to put on cream and keep a T-shirt on, they weren't my parents and I was too young to know the consequences.
"I got badly burnt on my shoulders and my back. I had blisters the size of golf balls that had to be drained with needles. The pain was indescribable. And that's where doctors think the skin cancer kicked off.
"Once I got to 11 or 12, we had the internet in our house and I was able to find out more about my condition and get really good with sun protection."
Growing up with albinism was a difficult experience for Laura, whose older brother also has a form of the condition.
She says: "When I was about five, children started saying, 'Look at her' or 'What's wrong with her?' You can imagine being in Italy and everyone has dark skin and dark hair -- I stood out with my fair skin and light hair.
"I was also taller than everyone else my age. I was bullied throughout my school life."
When she turned 18, Laura began to travel.
"I noticed the difference between the ways strangers would treat me, say, in Ireland or the UK or Germany and the way they would treat me and stare at me in Italy," she says.
One of those trips to Ireland was the fulfilment of a long-held dream. Ever since she was eight, she had a fascination with coming here, and after her first visit she was hooked.
"I kept coming back every six months and then I went out with an Irish guy and we went back and forth between the two countries -- thank God for Ryanair! Then I moved here for good in January 2010."
Laura now runs a beauty and fashion blog (www.hazyfairyland. blogspot.ie) which covers general areas but also gives advice to people with albinism, fair skin and visual impairments.
While she doesn't wear make-up every day, it gives Laura's face more definition due to the lack of pigment in her eyelashes and eyebrows.
Because of her Oculocutaneous Albinism, Laura is legally blind. Where someone with normal sight can see details from 100 feet away, Laura can only make those details out from five feet.
She has found ways to cope with her sight problems, including using a camera to zoom in on signs.
"I've had to get used to my condition over the years -- what other choice do I have?" she says.
"But it is frustrating that I can't drive. When I was a child, I actually wanted to be a car racer or a professional footballer, but unfortunately my eyes weren't good enough."

Here is a link to the on-line article
Posted by Hazy Fairyland at 9:19 AM