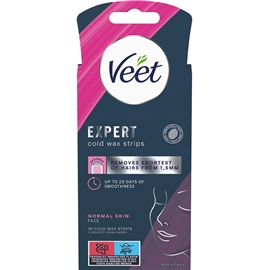 Firstly....I think it takes a lot of guts for a woman to admit she has to use face wax strips, secondly it probably takes even more courage to talk about it and what she does for it.
So, there....a lot of kudos for me before I've even written my review(wow...I'm getting better at all this blog writing malarky, not to mention English isn't even my native language. Hold on... woohoo even MORE kudos! YAY). Anyway....

At some point a couple of years ago I had in my hands a sample of the Veet Strips for legs, and because unfortunately I cannot wax my legs(long story, will talk about it more in depth in a future post/video), I decided to try it on my face.
And I have to say they worked wonders! I just had to cut the big strips in smaller ones, but I swear they worked wonders on my face! And the following days I had no red "dots" or anything.
Hence why I decided to try the real stuff for the face.
Well... I shouldn't have bothered!
For starters, as you can see below, the strips aren't clear. You'd think who's responsible for new product ideas would be smarter than that?! (or it's a man and he has NO idea a woman would like to see what she's doing when she's WAXING her face off) You really can't see anything through it, you just have to guess.
So I wamred up the strips, tried to apply to the desired area as best as I could without actually seeing anything, and then removed it: HALF of the wax was left on my skin. I had to find a "free" area on the strip to try and take the wax off.
The box claims "grabs hair as short as 2mm!", eeerrrr.... no, it doesn't! It doesn't grab short hair, it doesn't grab long hair. To be honest it doesn't grab much at all actually.
As for the "perfect finish" wipes I'll tell ya what they are...a perfect mess!! they are DRIPPING with solution that made my skin burn, I could have fried chips on it! It left my hands and face awfully greasy until I decided to scrub them raw to get rid of the oil on them.
So I was left with half the hair there, meaning I had to spend a long time the day after "cleaning up" with my tweezers, left my skin burning and greazy as well.
Not going anywhere near them EVER again. I'll just stick to the normal kind for legs I guess...

Posted by Hazy Fairyland at 7:15 AM