Where I used to live in Italy, in about a half an hour drive I was able to get to one pretty amazing outlet village which I still visit on my flying stays. It was the source of all my designer bags(like my €40 Rocco Barocco I would guard with my life!) and some other amazing pieces(Florence leather top quality jacket for €50 anyone?!).
So I thought it was about time I checked out the nearby outlet in Kildare and see what all the hype was about. Well, I wasn't OVERLY impressed to be honest. A very selected few good shops with VERY good prices, and some that had very dubious outlet prices...
What did I buy? I ALMOST bought a gorgeous Coast summer dress and a CK shoulder bag for €80...but my stupid conscience kicked in and came back empty handed.... *sigh*

HOWEVER I got very excited when I noticed inside the village there was an Italian restaurant, and by the look of the menu it sounded like a PROPER good one. The name "L''Officina"(the work shop in Italian) was kind of intriguing, I thought "hmmm....I wonder what they experiment with?!", so I decided we should give it a go. I usually try to stay well away from Italian eateries abroad as most of the time it's pretentious fake Italian, and it's NEVER cooked the way it should.

The first thing that did NOT impress me was the lack of table clothes, there were just simple thick cotton like table mats, and paper napkins: alarm bells started to ring in my head.... 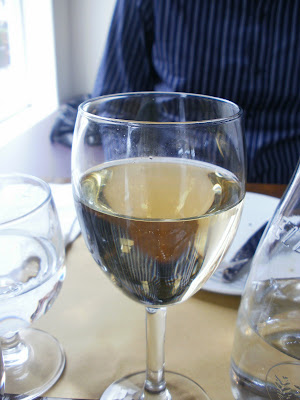 My boyfriend was with me so we went for tap water, however I felt I had to treat myself with some nice wine, given the lack of places in town where to buy PROPER Italian wine.
I wouldn't normally go for dry white wines but in the end I went for a glass of Vernaccia of San Gimignano: it's quite neutral and it didn't really go with what I ordered, but when I drink this, the first wine ever in Italy to get the DOC stamp, it takes me back to all my trips to Tuscany and feasting on amazing food and wines.
Well the wine was the right one, but it was served way too warm, big BIG no with white wine. 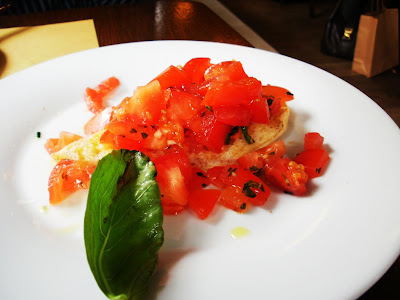 For starter we shared 3 pieces of (according to the menu) bruschetta with tomatoes and basil. This was NOT right!!! The tomatoes were stale and soggy, and for a proper bruschetta they MUST be fresh and plum, and mixed in there were big chunks of garlic. A bruschetta should give you a FAINT taste of garlic as it's(normally) rubbed on the bread before pouring the oil, you shouldn't have to chew on the garlic itself mixed with the topping.
The bread was too thin and not roasted enough to call this a proper bruschetta.
All in all this got a 4/10 from me. 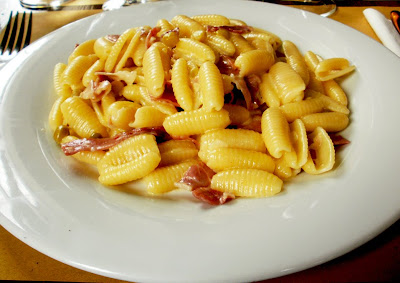 For my main I went for the pasta of the day, described as gnocchi with peas, Parma ham and a creamy sauce". For those of you who know what gnocchi are, basically they are small dumplings made usually from potatoes or bread crumbs and flour which we eat as an alternative to pasta.
I'm not 100% certain these were actually fresh, if they were, they want to change their pasta chef or their supplier because they were VERY dry and hard.
Next let's talk about the @cheating@ condiments: the peas were NOT fresh, they looked ALMOST yellow and some of them had not been defrosted properly and were still a bit hard. As for the Parma ham that was NOT Parma ham, you do NOT fool me!!! First of that was COOKED ham, overcooked too, NOT soft delicious nutty Parma ham!!!
And how about the sauce? There was probably half a spoon of it on the bottom and it was either from the day before or had been TO reduced.
When I pay TWELVE euros for a plate of pasta I do NOT want to be served this and do NOT want to be cheated on ingredients.

I was not happy at all with this place, but I guess it'll do for anyone who doesn't know what the real dishes are meant to be, after all it was pretty much full to capacity the whole time we were there....

NEVER again as far as I'm concerned, I cook far nicer Italian than this!
Posted by Hazy Fairyland at 4:51 AM